Organizers of the original Rules Change Summit at UMass Amherst in April 2013 chose five “categories” of rule changes to help prompt discussion. As a result of discussions at the event, a sixth category, “Sustainability” has been added.  You can also view and print examples of discussion ideas.

Also: All the ideas considered at Amherst 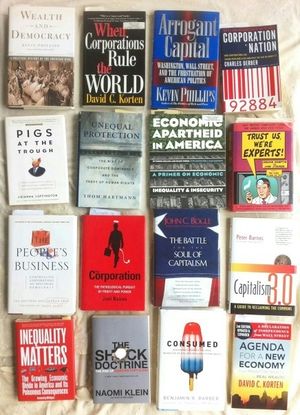 The five key categories listed above are drawn from more than two decades of writing and thought by dozens of executives, authors, scholars, public officials and engaged citizens. They are listed as 15 sub-categories below. All of these are relevant subject matter for the Rules Change Summit; to effective at initiating change, we’ll focus the convening process on the top five, above. For a work-in-progress effort to identify the key sources of these mainstream ideas, see: “RESTORING DEMOCRACY AND CHANGING CORPORATE RULES (A new taxonomy/synopsis/overview): Charting two decades of thought on reforming the impact of money and corporations on American public policy.” (also downloadable as a PDF.)

In Case You Missed It