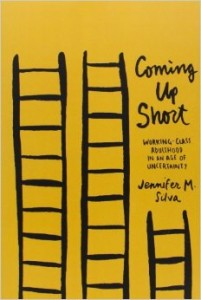 While earning her Ph.D. in sociology at the University of Virginia, Harvard University postdoctoral fellow Jennifer Silver began studying the impact of economic inequality on young adults.

In her 2013 book Coming Up Short: Working Class Adulthood in an Age of Uncertainty,  Silva  describes the barriers to reaching the hallmarks of American adulthood in the neoliberal era. With tuition prices rising and unemployment high, socioeconomic self-advancement through education does not come as easily as the American dream once provided.

Silva examines how the economic consequences of neoliberalism create uneven burdens. Silva points out that more than one third of low-income families were paying interest payments equivalent to 40 percent of their income in 2007 versus highest-income families who paid only 3.8 percent of their income in interest payments. Student and car loans also add to this state of financial instability faced by millions of young Americans, she writes.

Silva brings the story to life through a number of informants who share first hand observations on the psychological, social, and economic effects of neoliberalism. The book is well written, highly accessible, and targets many of the salient political issues of our time.

“Jen is currently working with the Saguaro Seminar on a team led by Harvard Professor Robert Putnam that is exploring the impact of economic insecurity on social connectedness and civic engagement. As a qualitative researcher on the project, Jen interviewed young adults and their parents from diverse backgrounds across the US about the challenges of growing up today.”  (excerpt from her Harvard “bio” site)

Coming Up Short is available here.  Read an additional review.