The Burden of Student Loans

The problem of growing student-loan debt has surfaced as one of the major issues facing our country, because they are creating a class of Americans — some of them now elderly — who are burdened from young adulthood with debt and therefore forced to make career decisions with that in mind.

Student loans (BACKGROUND) offer both young Americans and parents an avenue through which they can afford the rising costs of colleges and universities. A college degree, however, no longer ensures employment for young graduates who consequentially find it more difficult to keep up with their payments. For the first time in history, U.S. student-loan debt is over $1 trillion. The federal government is seeing an increased number of delayed payments on loans.[1] 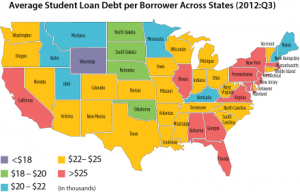 Student loan policy is an example of how bureaucratic interest can drive real policy. An article published in 2003 by the U.S. News and World Report took a behind-the-scenes look at the political lobbyists who were pushing the burden of student loans on American taxpayers in return for big profits from Federal Family Education Loans (FFEL) loans. From 2000 to 2003 lobbyists had convinced over 62 colleges to drop out of the direct loans program.[2] The larger private organizations that serviced student loans, such as Sallie Mae, used profits to increase their presence in Washington, particularly with Republicans. It is reported that Sallie Mae has spent close to $6 million on political contributions from 1992 to 2012.[3]

With the Democrats in control of Congress, Obama signed the Affordable Care Act that effectively ended the guaranteed loans program by eliminating any FFEL loans after July 1, 2010.[4] The decision to end the FFEL program is estimated to save $68.7 billion over the next 10 years.[5]

While 2010 represented a major change in the student loan policy, the problem of a huge and growing debt still exists. Students from the class of 2014 graduated school with an average debt of $26,600 a person.[6] There are also an estimated two million Americans age 60 and older that are still in debt from student loans, and the size of that debt has grown from eight to $43 billion between 2005-2014.[7], especially from for-profit schools. The rules change that eliminated guaranteed loans certainly was the most significant student loan policy change to date. However, there is still clearly much remaining policy work to be done in order to realize President Obama’s hope that, “People who have the grades, the desire and the will, but not the money, can still get the best education possible.”