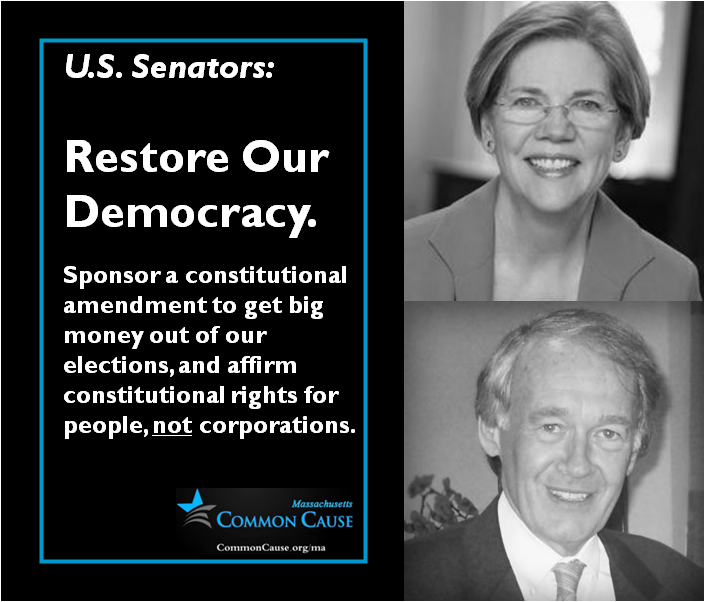 Nine Massachusetts advocacy groups, including three co-convenors of the May Rules Change Summit at UMass Amherst, have penned a letter to the state’s two United States senators asking them to sponsor “sponsor constitutional amendments to get big money out of our elections, and affirm constitution rights for people, not corporations.”

The Democracy Amendment Coalition of Massachusetts (DACMA) is a group  of advocacy organizations and activists in Massachusetts working toward an amendment to the U.S. Constitution affirming (1) the power of Congress and the States to limit political contributions and spending, and (2) constitutional rights for natural persons, not corporations.

This was an issue discussed at the Rules Change Summit and is contained in its mission statement (“We support: …
Electoral reforms that restore faith in our democratic process.”)

The coalition’s work has resulted in every House of Representative in Massachusetts sponsoring a democracy amendment in the current Congress. Our efforts now turn to the U.S. Senate where neither Senator has sponsored an amendment. We are circulating an organizational sign on letter urging Senators Markey and Warren to sponsor an amendment. If you represent an organization that would like to be included on the letter please please contact Tyler Creighton at (617) 426-9600 or tcreighton@commoncause.org as soon as possible.

DACMA is circulating an online petition and offline petition. It can be circulated by supporters by sharing our post on Facebook and retweeting us on Twitter.