BOOK: The “myth” of shareholder primacy stands at the brink of intellectual failure, Stout writes

Book author Lynn Stout produced The Shareholder Myth in 2012 to challenge the advancement of “shareholder value” as the exclusive guiding principle of corporations. 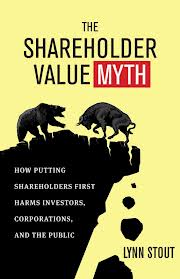 Stout, a Cornell Law School professor, debunks the “shareholder myth” by showing how the principle of profit maximization sets corporations on an unsustainable trajectory — detracting from the well being of customers, employees, local communities, and even shareholders themselves. Stout writes that those obsessed with shareholder primacy possess “one fatal flaw” which is “the notion that corporate law requires directors, executives, and employees to maximize shareholder wealth simply isn’t true.”

She adds: “There is no solid legal support for the claim that directors and executives in U.S. public corporations have an enforceable legal duty to maximize shareholder wealth.”

Stout also turns to the empirical record in order to further invalidate the efficacy of the profit-maximizing firm. Stout urges caution in the face of shareholder-supporting proposals by warning of the “remarkable lack of a reliable empirical connection between shareholder-oriented governance practices and better corporate performance at the level of the individual corporation.”

Stout was among participants in a 2013 think-tank session at the Drucker Institute.

Instead of leading to stronger corporate performance, shareholder primacy forces managers into a “myopic” point of view where long term performance is sacrificed in the name of short term shareholder returns. For example, Stout notes the choice to cut research and development costs that fund longer-term growth as common targets of dividend-hungry investors. The result, as Stout writes, is a divergence of interests between shareholders. Investors seeking long-term returns favor corporate decisions that help prepare the company for the long road ahead rather than short-term shareholders who favor immediate and substantial returns from the company. Stout uses the analogy of fishing with dynamite to express the harmful long-term effects of divergent interests among shareholders.

“Conventional shareholder primacy,” according to Stout, “stands on the brink of intellectual failure.” In order to survive, Stout anticipates that “it must evolve into a new, more complex, and more subtle understanding of what shareholders really want from corporations.” By pushing the boundaries of investor consciousness and challenging the restrictively narrow profit-maximizing principle of corporations, Stout’s book represents a powerful critique of shareholder primacy worthy of considerable and sustained attention.