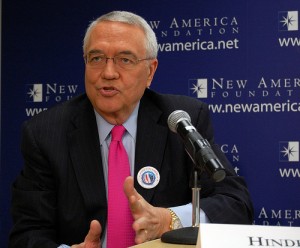 Leo Hindery is a one-time cable and media mogul and a private-equity fund manager who heads the Smart Globalization Initiative of the New America Foundation.  He writes magazine columns. And, as part of a group called “Smart Capitalists”, he’s also on a tear about the minimum wage.  In 2014, he joined a group of other executives in a visit to Capitol Hill to lobby for an increase in the U.S. federal minimum wage. And in the process, he lobbed pot shots (VIDEO)  at the CEOs of MacDonald’s and Walmart for not giving their workers a raise. “It’ such an ethical issue and it is the right place to start to address the imbalance.”

MacDonald’s and Walmart have both moved in the right direction since then. But Hindery says the problem is much deeper than just two companies, starting with the way the government measures and reports unemployment. “We have more income inequality in the United States that we’ve had since 1928,” he says.

While the sheer amount of jobs in the US are growing, by 280,000 in May 2015, the unemployment rate is actually increasing and middle-class workers are finding it harder to make ends meet and earn a living wage. Fundamentally, this is catalyzed by the disappearance of quality manufacturing, blue-collar jobs that have allowed for widespread employment and prosperity. Now, the epicenter of middle-class employment is shifting to corporations, such as WalMart, that value cost cutting and shareholder value above all.

But those figures fail to address the full scope of the problem of “real employment,” says Hindery, managing partner of InterMedia Partners, a New York-based media industry private equity fund. This is because the number only includes those who have actively searched for work in the past month. There are many who are seeking jobs and have searched for one in the past year but have been too discouraged or somehow hindered from looking during the past month. Hindery estimates there are about 1.9 million “marginally attached workers” as he calls them. Hindery includes part-time-of-necessity workers in his definition of real unemployment, workers who want a full time job but are stuck with fewer working hours than they need. He estimates that there 6.7 million part-time-necessity workers.   Thus he says the real unemployment rate remains steadily at 10.8% from last year to May of this year.

In large part, this problem occurs because big corporations, such as Walmart, believe that hiring many part time workers and releasing their schedules at the last minute will be the most efficient way to align supply of labor with demand. The more last-minute the schedule, the more accurate the forecast of how many workers are needed, and the less commitment. However, the cost of understaffing can often be higher than overstaffing. Furthermore, the problem of forecasting demand could be largely avoided if there was more investment in employees, such as training employees across many tasks in the company. In this way the task, not the required employee, is what varies depending on demand.

This approach is in contrast to the “good-jobs strategy” advocated by MIT Sloan School Prof. Zeynep Ton.